Caravaggio the Painter- a Closer look at his Life and Art

Caravaggio the painter’s full name was Michele Angelo Merigi da Caravaggio, however, we will just refer to him as Caravaggio. His paintings combine an incredibly realistic observation of the human state with a dramatic use of lighting. The dramatic light in his work had a formative influence on Baroque painting.

Caravaggio would make close physical observations of what he painted. At the same time, he would combine his careful observations with a dramatic use of chiaroscuro. The combination of these two elements came to be known as tenebrism.

Caravaggio the painter worked rapidly and often depicted dramatic scenes featuring violent struggles, torture or even death – subjects befitting the dramatic techniques he used. He would often forgo making drawings choosing to paint directly onto canvas. He made a profound impact on the new Baroque style. So much so that his influence can be seen in the works of Peter Paul Rubens, Jusepe de Ribera, Gian Lorenzo Bernini, and Rembrandt.

Some key Facts of Caravaggio the Painter

The innovations that Caravaggio brought to painting with chiaroscuro did not just inspire Baroque painting but continues to inspire artists today. Interest in his work however fell out of favor when styles and fashions changed. In the 20th century interest in Caravaggio’s work revived once more when the contributions he made to the development of Western art was reevaluated.

The art historian Andre Berne-Joffroy states; “What begins in the work of Caravaggio is, quite simply, modern painting.” Despite the fact that Caravaggio’s work is over 400 years old it is still fresh and relevant to our modern eyes. Caravaggio was a trailblazer of his time.

Read How to Paint your own Chiaroscuro Painting if you want to learn how you can make a painting of your own in a ‘Caravaggesque’ style.

Now we will take a look at a few of Caravaggio’s paintings!

The Crucifixion of Saint Peter

The first time I saw this painting I was shocked that it was in a dark corner of the Cerasi chapel of Santa Maria del Popolo in Rome. If you wanted to see it you had to give a coin so that a light would turn on and allow you to view it for several minutes. Since we were frugal students, my friends and I would look other paintings in the church while keeping an eye out for another tourist to place in a coin so that we could view the piece! 😉

In the “Crucifixion of Saint Peter” Caravaggio does not depict a heroic martyr or Herculean hero in the manner of Michelangelo. Rather he shows us an old man suffering and about to face death. In other words, Caravaggio brings us face to face with reality. It is a hallmark of his work to paint what he observes with the greatest physical accuracy.

Also, notice the dirty feet in the painting. Caravaggio was known to have used beggars as models in his paintings who were not able to afford shoes. Again, we notice an extreme attention to what is real – even when it might not be considered ‘beautiful’ by mainstream society.

The Calling of St. Matthew

Caravaggio’s calling of St. Matthew depicts the moment when Jesus Christ inspired Matthew to follow him and become a disciple. It was created to be displayed on the left wall of the Contarelli chapel in the French church of San Luigi dei Francesi in Rome. Caravaggio’s former employer won the commission but was unable to complete it due to many other commitments. Luckily for Caravaggio he was later given the commission. It would be his first important job.

In line with Caravaggio’s chiaroscuro style all the figures are engulfed in shadow. A beam of light shines from the right side of the canvas highlighting St. Matthew and the seated group.

The Conversion of Saint Paul

This painting resides on the other side of Caravaggio’s “Crucifixion of Saint Peter” in the Cerasi Chapel of Santa Maria del Popolo in Rome. The painting depicts the moment when Saul fell off his horse when he heard a voice say to him “Saul, Saul, why do you persecute Me?” He said, “Who are You, Lord?” The Lord said, “I am Jesus, whom you are persecuting.”

There is great sense of stillness in this piece – it captures a moment in the dramatic story of Paul’s conversion. However, simultaneously there is a great sense of drama in the painting because of Caravaggio’s strong use of Chiaroscuro. In addition, the unusual perspective of the piece brings the viewer to experience the painting in an unusual way by leading our eyes first to the ground where Paul lies. It is a remarkable departure from more traditional compositions in his time period.

Caravaggio was an innovator in the world of painting. His whole career, his whole life went against the grain. The artist’s fiery temper could not be quieted as he left behind a trail of misdeeds throughout his life which culminated in murder. Towards the end of his life it would all ultimately catch up with him.

In an attempt to secure a pardon for his sins from the cardinals and the pope he made a painting. It is one that is conventional in subject matter but entirely surprising in every other way. It is David holding up the head of Goliath. The head in this case is Caravaggio’s face. It was as if he was, in the guise of Goliath, turning himself in. The painting seems to read ‘Guilty as charged’.

Unfortunately, the painting would arrive too late for Caravaggio to receive his pardon. He died before the painting even reached the pope and cardinals.

Be sure to grab my FREE Color Mixing Guide for Painting

Below are some excellent resources on the work of Caravaggio if you wish to learn more. Also, if you want to make your own ‘Caravaggesque’ painting check out the article ‘How to Paint your own Chiaroscuro painting.’

The publisher Taschen releases the best art publications available on the market today. Here is a volume of the complete works of Caravaggio – an must have for all art lovers.

Caravaggio: A Life Sacred and Profane

A wonderful retelling of the life of Caravaggio. You will come to understand what was happening in his life while during each work he painted.

Mixing Fall Paint Colors: How to Paint with a Fall Color Palette 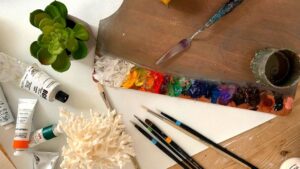 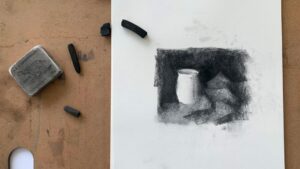