Subscribe and get my FREE color mixing guide, with actionable tips for mixing colors you can start putting into practice right away!

Velazquez will always be a painters painter. For centuries, artists have been studying his technique and the masterful way he used paint. This post will give you some insight into the materials and techniques of the artist. You will find further resources at the bottom of the article if you wish to delve further.

The number of pigments used by artists in the time that Velazquez lived in were very few. He used the same colors throughout his career. However, the way he used them changed considerably over time.It is presumed that Velazquez only used the ones listed below:

It appears that Velazquez did not have a fixed idea for a composition when he started a painting. Rather, he would continually make changes as he would work. In fact, sometimes you can spot the changes with the naked eye spotting overlapping contours or changes to the entire composition.

Sometimes, the changes he would make would be minute, such as changing the position of a hand, collar or piece of lace.

This flexible approach to composition can be applied to your own work. When you work on a piece, approach it with an open mind to potentially change elements as your piece progresses. Sometimes, you cannot see the ‘big picture’ of your painting until you are further along. Thus allowing yourself to continually make change (if needed) will result in a much better composition than you would have if you had never made any changes.

Knowledge of the past

As a young man, Velazquez met Peter Paul Rubens. Rubens travelled to Madrid to help negotiate peace between Spain and England and ended up remaining in the country for 7 months. This encounter surely opened the eyes of Velazquez to a bigger world of painting. Although Velazquez was a brilliant painter in his own right he was still just a provincial painter from a small town and known in a small circle – until that point. Rubens must have shown him what he would need in order to reach the heights of his painting profession.

To reach this, he would need a deep and profound knowledge of the art of the past. Velazquez travelled to Italy where he studied Italian art at great length. His teacher, Pacheco, says that ‘he devoted to copying the great frescoes of Raphael and Michelangelo in the Vatican.’ The results of his studying can be seen in two paintings he painted in Rome – ‘Joseph’s Coat Brought to Jacob’ and ‘Forge of Vulcan’. Velazquez utilizes Italian painting methods in these works that he picked up during his time there. His spaces are entirely convincing in terms of being an illusion of space. For example, in ‘Joseph’s Coat Brought to Jacob’ you can see a tile floor laid in checkerboard pattern which leads the eye back to a landscape – an old Renaissance painting trick.

Studying the art of the past is important when it comes to learning how to paint. To learn more about how to study art of the past as a painter go to ‘Copying and Learning – Edgar Degas’ as well as ‘Master Copy Portrait Painting’

Velazquez worked with great economy in his paintings. The sketchy quality of his most recognizable hallmarks. When looking at ‘lacy’ details on portraits up close you can see what is meant by ‘sketchy quality’. There is not a laborious effort made to get every last square inch of lacy detail. Rather, Velazquez simplifies what he sees and makes a summary of not just decorative elements but the whole of the painting. When taking a step back while looking at a Velazquez painting, the areas that look ‘Sketchy’ up close suddenly come together to look entirely real.

His simplifying of what he observes is part of what makes the paintings of Velazquez so brilliant. He is able to summarize a lot in a few brushstrokes. What is true in writing – distill your message to as few words as possible – is also true in painting. The fewer brush strokes you use – the better. For more, read ‘4 Tools to help simplify while painting’.

Velazquez worked in a direct painting technique known as alla prima. This means he worked wet on wet with one layer as opposed to working in a more traditional way of painting in multiple layers.

Alla prima painting requires one to work quickly which encourages one to simplify and summarize. There is an effortlessness evident when viewing a work of Velqazquez – something due in large part to the alla prima painting technique. To learn more, head to ‘Alla Prima Painting Tips.’ 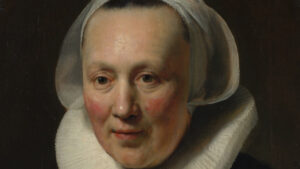