I recently moved to downtown Seattle. For the past two years I have been living in the suburbs – so it is a big change! After being inspired by the new location I decided to create a city drawing tutorial for you since I have access to some open city views! Drawing a city provides some opportunities to look at big large general shapes and work on simplifying.

If you are a painter – don’t leave! This drawing tutorial will help you to build your skills in creating a realistic sense of light. Values are extremely important in painting. Working on them with paper and graphite first will help you to create better paintings. As when you understand tonal values, you will be able to create a stronger sense of light and dark as a result.

I drew this tutorial from life – meaning that I did not draw it from a photo but from viewing the real thing in person. However, above is a photo for you to get an idea of what I was looking at. There were some changes in the weather throughout the course of my short drawing session (Seattle is notorious for its quick changing erratic weather 😉 .

Materials used for drawing a cityscape

The materials used for the tutorial are simple – a woodless artist graphite pencil and a soft Faber Castell eraser. You can see my pencil case beside the items as well. I always carry this pencil case with me – as drawing on the go is the best!

How to start your city drawing sketch

In the beginning I first focus on creating a line drawing. I want to get the placement and measurements of the building correct before moving on to creating values and tones. I start with the building that is in the center and then move outward from there.

Next, I draw the buildings that are next to the first building I drew in. I use the other surrounding buildings as a guide to know where the buildings should be placed. It is always good to use surrounding elements as a measuring tool.

Before beginning with values I add a final building to the right of the other skyscrapers. This addition helps to complete the cluster of buildings.

With your drawing you want to have enough drawn out before placing some basic value structures around your drawing.

Now with the line drawing for the city sketch in place, we start adding some basic tonal values! I start by putting in the general shadow values on the buildings. Try not to get distracted by small details. Simply look at the big picture and draw the general light and dark values that you see.

One very helpful tonal value drawing tip, is to squint your eyes while searching for basic values! Simplifying is much harder than it may seem at first. This is one big aspect where practicing simplifying while drawing will really impact your painting skills in a good way. When you start to simplify what you see your skills improve drastically.

When applying values it is helpful to hold your woodless pencil sideways as shown in the image above. Doing this helps for you to place large basic value shapes quicker. If you were to hold it like a normal pencil then you could just apply values by drawing many lines next to each other.

Again, I continue to draw all the dark values that are included in the drawing. I leave the lightest areas blank so that the white of the page shows through. In addition, I apply a very light smudge for the areas that are medium in value – between a light and dark value.

In addition, I start to work with the sky and begin shading in the left side of the sky in the city drawing sketch.

Adding on to the city drawing

In this next step I add the building with the dome top to the bottom right. Like before, I first create a basic line drawing to get an idea of the size and shape of the building. Then, I start to add some of the basic values around the building.

Drawing the sky and more value shapes in city drawing

Also, I start to add another building on the far left side of the drawing. You can see that I started to create a line drawing if you look to the far left.

The sky is also further developed by shading in some areas and erasing out the areas that are lighter in value. The eraser will be very handy for drawing and developing the sky area.

The cityscape drawing is further developed by shading in the extra smaller building I added in on the far left. Notice that I shaded in the dark value on the front facing wall of the building while the left wall is lighter in value with just a light graphite smudge.

Adding the sky to your drawing sketch

The sky in the city drawing is now further developed by using both our pencil and eraser together. We erase out the areas that need to be lighter in value. The areas that have dark clouds are drawn in with darker values.

The sky is constantly changing due to the fickle nature of the weather – so I work with the changes that are happening in the sky. As long as the lighting in the scene stays generally the same it will work! Creating an outdoor sketch can sometimes make you work quickly so that you can capture the sky and light as it is before it changes again.

I add on to the buildings by starting to draw in another one towards the bottom part of the city drawing. Adding some buildings at the bottom of the drawing will help to round out the composition.

In addition, I also add on to the building that is on the far left. When comparing the drawing to the photo you can see that I am simplifying. I do not pay attention to each individual window on the buildings. Instead I get the general value shapes – but am very precise about getting the correct measurements and placements of the buildings.

I draw in the values for the newly added building at the bottom portion of the city drawing sketch. As you can see the front wall is a medium value. While the left facing side wall is lighter and shows the white of the page since the sunlight is hitting it.

In addition, I shade a large portion of the left side with a darker value. Instead of drawing each and every building distinctly I lump them together and summarize them since they are the same value. Since this is a simple city drawing sketch I do not need to make every element in the drawing distinct and detailed.

Though I am summarizing some areas I do make the bottom front portion of the city drawing more distinct since there are some clear light and dark shapes. For example the side of the new building closest to the left is light in value while the side to the right is darker. These distinctions help to create some clarity.

I add darker values to the far left part of the city drawing sketch. This will help to further balance the drawing more.

Adding a building and simplifying shapes in a city drawing

I simplify the values by making the darker value meld with the dark values that surround the building. Part of simplifying is joining similar values together. It would be impossible for us to draw every single value that our eye sees as the value range of our pencil and paper limit how many values we can draw.

Now we reach the end of the city drawing sketch! I work at making the sky reflect what I see in real life by making some areas a little bit darker and creating a large white cloud at the top portion of the drawing sketch.

Even if you do not live in the city this is a great sketchbook drawing idea. You can find large simple shapes wherever you may live. You could even set up a still live with blocks that represent blocks. After all skyscrapers are just fancy (and very large) rectangular shapes!

And even if you do live in the city don’t limit yourself to just drawing a city – explore beyond that and work on simplifying all of the value shapes you see. 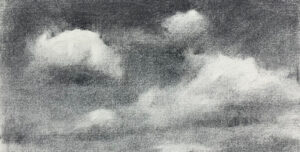 How To Draw Clouds – Drawing Clouds with Charcoal