The Importance of Roman Fresco Painting in Art History 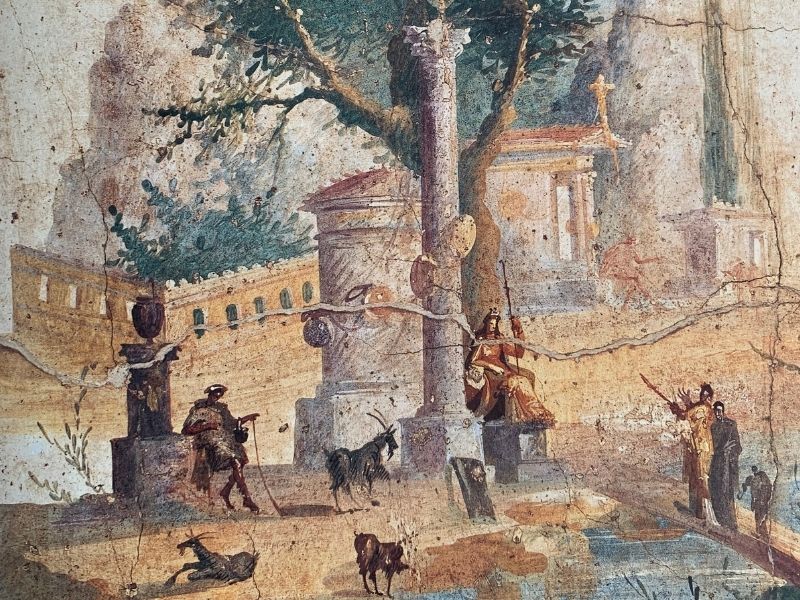 The first time I saw Roman fresco paintings, was at the Naples National Archeological Museum. It during the time I was attending a painting program in Italy and seeing the Roman paintings completely bowled me over. The experience made me fall in love with painting all over again…

What the ancient Romans accomplished with wet plaster and powdered pigments is utterly astonishing! There is an enormous amount we can learn from the work they created.

But first, let’s understand what frescoes in art are and how they are made…

What is fresco painting?

Roman fresco paintings were made using a technique called… well… fresco! Fresco is a painting technique involving the application of pigment to wet plaster and the subsequent drying of the image.

An artist works quickly before the plaster dries because fresco paintings are made while the plaster is still wet. This is another mind boggling aspect when viewing Roman frescoes. They didn’t have long periods of time to labor over their work – yet the artists were able to accomplish an incredibly high level of skill in a short period of time.

But beyond the very high level of ability shown in Roman paintings – what makes them so special and important for us in our modern era?

The role of Roman fresco paintings in art history

The techniques and skills used by the Roman painters forever influenced the development of western painting thereafter. In fact, one of the most distinctive features of Renaissance art – as you will see in this article – is directly because of what these ancient artists started.

The renaissance and Roman fresco painting…

The Renaissance was a return towards the ideals of Greek and Roman art. Realism, color harmony, and symmetry became once again important in art. The Renaissance ushered in a new appreciation of beauty in nature as well as looking towards ancient sources from Greece and Rome for inspiration.

In addition to this shift, Renaissance painters developed new ways to portray perspective, as well as light and color. They began to re-examine the concepts of artistic genius and excellence, and believed that these ideas were best represented in the art of the ancient Greeks and Romans.

The three graces in Roman painting

Here we also see a detail from a painting by Botticelli depicting the three graces. The positions of the figures vary more compared to Raphael’s painting, but we can still clearly see the influence of Roman painting.

The influence of perspective in Roman painting

The first use of single point linear perspective is often falsely attributed to Italian Renaissance artists. However, Roman artists used single point perspective to great effect. They would often use the method to transform the windowless walls of Roman houses into “picture windows” that would help to visually expand the space of rooms.

On the topic of perspective alone, Roman painting was incredibly influential on the development of art. Not only did they use it to add another element of realism and beauty – but they also used it to create the illusion of a third dimension! The ancients were in many ways centuries ahead of their time in terms of art and innovation.

Example of perspective in Roman painting

The Roman Painting below from the Villa of Publius Fannius Synistor at Boscoreale is a wonderful example of perspective in Roman art. As you can see in the image of the painting below it does violate the technical strict rules of one-point perspective.

However, the painting shows a clear and practical understanding that the lines converge at the viewers line of sight. This level of understanding of perspective demonstrated in Roman painting could not have come about by accident or purely from naked eye observation. Rather, the Roman artists knew what perspective was and how to use it. Unfortunately the skill they development for perspective would disappear from art until the fifteenth century!

Light and shadow in Roman art

The use of light and shadow was first introduced in the ancient fresco paintings of the Romans (as well as the Greeks). Understanding the way that light behaves in a particular environment allows for a painter to create rich, realistic imagery which is closest to our own human interpretation of what we see around us every day.

The ancients began to study the science of optics – and this evolved into a way for artists to mimic the world around them in a more realistic fashion using light and shadow.

Examples of light and dark values in Roman frescoes

Above is a detail of a Roman fresco painting that doesn’t just have a clear sense of light and dark but also shows a very realistic representation of shiny reflective material. Notice the clear light and dark values in the painting despite the complex ornamentation. This painting is a true witness to the sophisticated understanding Roman artists have of how light and shadows work in nature and how to then apply it to a painting.

The Roman paintings that survive today are ancient but just as alive and relevant today as they were thousands of years ago. Roman paintings are not the typical go to art works for most painters to look at for reference and inspiration.

I encourage you to take a look at all of the beautiful work Roman painters created thousands of years ago. We owe a lot of our painting tradition to Roman art! Understanding the birthplace of western painting deepens your knowledge and appreciation for art in general.

More importantly though, Roman painting provides an enormous amount of inspiration and guidance for your own work. I feel the same excitement today when looking at them as I did years ago when seeing them for first time in Naples, Italy. They are truly timeless works of art…

Leave me a comment below and let me know your experience with Roman frescos! What do you think about them?

Want to remember this? Save Roman Fresco Paintings in Art to your favorite Pinterest board!